Local actors mobilized for the protection of property and populations

In charge of prevention, protection and fight against fires, the Rescue and Fire Service of Haute Corse (SIS 2B) also contributes to the protection and fight against other accidents, disasters, assessment and prevention of technological or natural risks as well as emergency aid. Fully invested in crisis management during floods, the Fire and Rescue Service of Haute Corse devised in 2018 a training tool for coordinating relief on the ground in the event of floods. In order to carry out this project, SIS 2B has integrated the European Interreg program. This program aims to design new forecasting and operational management tools in order to reduce the population’s exposure to danger and increase the capacity to anticipate floods. Thanks to the funds allocated by this European program, the Rescue and Fire Service of Haute Corse (SIS 2B) has acquired a digital simulation tool allowing to manage scenarios of different natural disasters: flood, flash flood, marine submersion, forest fires, etc.

Specialized in 3D simulation allowing the training of authorities and the anticipation of major crises, it is the company VR Crise which developed the training simulator. This tool also aims to train municipal and inter-municipal services within the framework of the implementation of communal backup plans (PCS). The implementation of this teaching makes it possible to put elected officials and public services in a real crisis management situation in their own territories.

On the « flood » component, TENEVIA proposed to carry out a hydrological and hydraulic analysis in order to integrate the real behavior of the Bevinco river in the simulator developed by VR Crise. The Bevinco is a coastal river draining a watershed of nearly 70 km2. Although its flow is low for most of the year, it is affected by rapid and violent floods during heavy rains. The upstream part of the basin is relatively natural, while the downstream part is highly urbanized and has heavy stakes. The region was particularly affected by the floods of 2014, 2015 and 2016 that hit Upper Corsica. The Bevinco then quickly climbed into charge and caused significant property damage declaring the state of natural disaster.

The study carried out by TENEVIA aims to reconstruct the spatial and temporal evolution of the floods of several events marked by the Bevinco, in particular 2014, 2015 and 2016. It is based for this purpose on the cascade of hydrological and hydraulic models, allowing the reconstruction of the flows of Bevinco from the precipitation that has been observed, then their propagation and the overflows generated on the territory.

The first phase is to model the watershed in order to understand its hydrological behaviour. To this end, the HydroCore model, representing how hydrological processes and the watershed will affect precipitation and produce flow in the river, was used. To simplify, it transforms the rain into flow.

The initial steps in the deployment of HydroCore are the creation and calibration of the model through historical data collection. To do this, the data necessary for the study were identified and collected from various stakeholders in hydrological information on the territory :

Once the hydrological model is created and calibrated on these data, HydroCore is able to simulate spatialized flows at nine entry points in the Bevinco watershed. These points are otherwise referred as virtual stations.

In a second phase, the study aims to carry out a hydraulic analysis to reconstruct the floods caused by the rising waters of the Bevinco. To do this, hydraulic modelling was deployed on the downstream part of the watershed. By being coupled to HydroCore, it has made it possible to simulate and propagate on the territory the flows simulated by the model and thus recreate the spatio-temporal evolutions of the flood expansion fields on five replayed events:

The final depiction is illustrated by flood maps produced at a 5-minute time step to identify flood overflow areas. These maps represent spatio-temporal changes in the fields of water level, velocities and flows downstream of the Bevinco watershed.

The virtual reality simulator developed by VR Crise will then exploit these flood maps by integrating them into the training simulator. This project enables local authorities to optimise flood crisis management, based on data that is as close to reality as possible.

Now that the hydrological model is created and calibrated, it can also be used in operational use by providing real-time flow forecasts to anticipate flood events. To learn more about operational hydrological forecasting, visit HydroCore’s page on our website by clicking here. 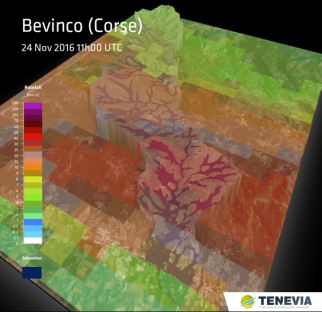 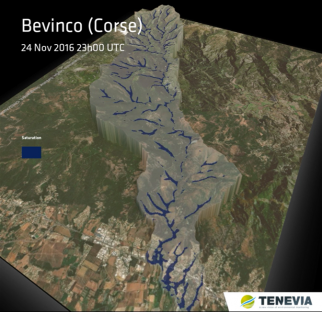 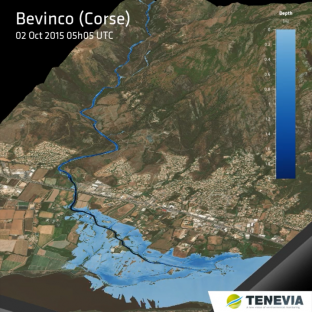 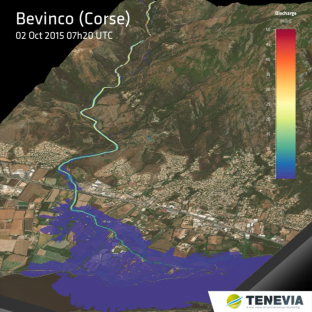 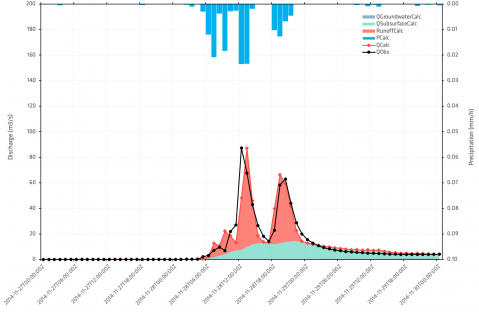 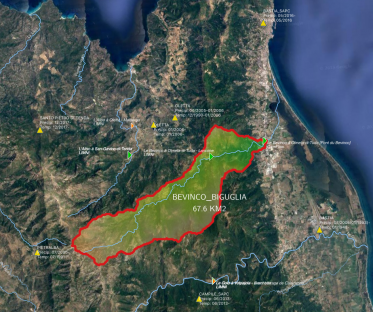 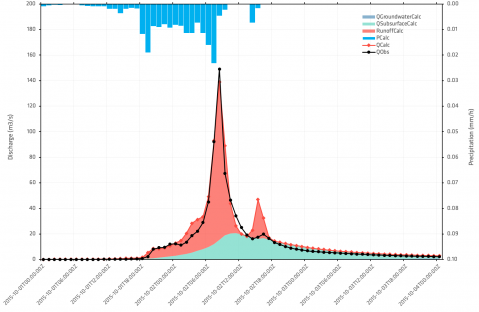 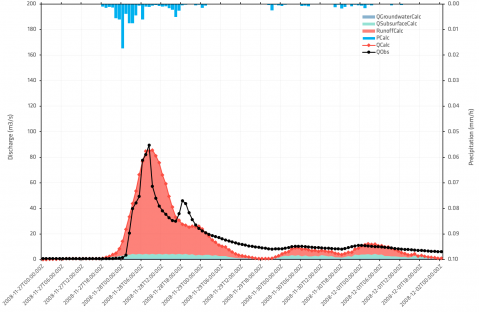 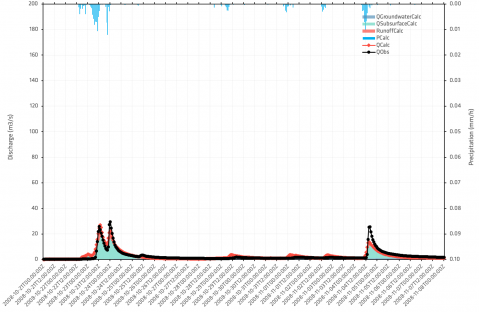 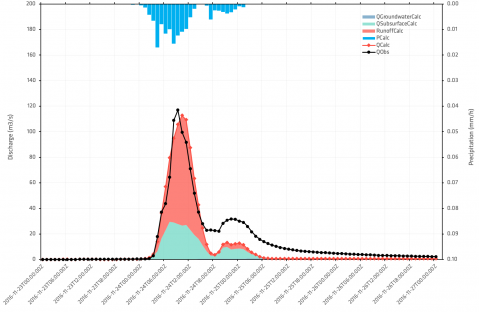 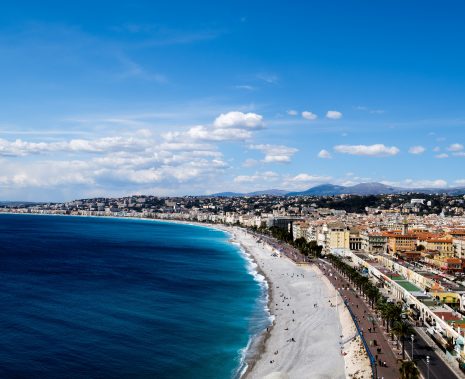 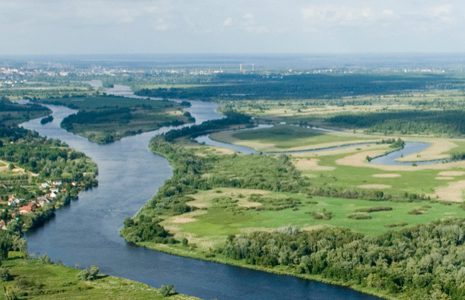